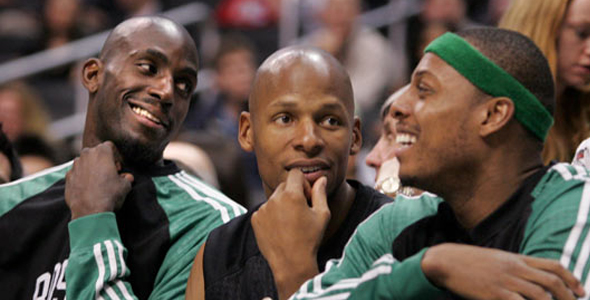 The NBA Season came to a close last night as the archrivals Lakers and Celtics faced each other in an all deciding Game 7. Some people spoke about a miracle, referring to Boston’s post season achievements – others saw it as the final chance of an aging team. All the talk aside, if you are in a Game 7 of the NBA Finals, anything else but a victory is a disappointment. So yeah, the Celtics have numerous reasons to be really down in the dumps right now.

But if you take a look further into the future, the Boston Celtics have already won – they won the free agency summer frenzy before it even starts.

The decision to give point guard sensation Rajon Rondo a contract extension – after he got thrown under bus by GM Danny Ainge after last season’s playoff exit – was undoubtedly one of the best moves in franchise history. Rondo showed exceptional talent and huge performances. Being the reason for the Celtics’ success, Rondo’s brilliance finally earned him the utmost respect by the Big 3 and the command over the team – a team that is old and maybe played its last huge playoff tenure.

Just think about the buzz that would surround Rajon Rondo, if he wouldn’t have signed that extension. Teams like the Knicks or Heat would throw buckets of cash at him while teams like the Grizzlies and Nets would offer half their team in a sign-and-trade. The Celtics on the other hand would be in a tough spot, having the chance to upgrade their roster by accepting such a deal with another team. Making sure that Rajon stayed with the Celtics may have rescued their future.

By losing late last night, Boston prooved all doubters right – this team was running on 120% … with a massive energy output that resulted in late game collapses. But here is Rondo … a young stud, All Star and one of the best floor generals already. Beside the dead corpse of KG, the commencing slow motion game of Paul Pierce and an up-and-down Ray Allen, this team has a future, personified by the young point guard.

Boston can be proud of that team. And Boston can sleep well on the fact that another disappointing decade like the 90s or the early 2000’s won’t happen again. Even if Garnett fulfills his contract, Pierce signs a huge extension, and Allen stays for sentimental reasons, this team still has one of the most exciting players in the game.

So forget the loss, forget the aging roster and forget that Rasheed is under contract for the next two seasons (just for a moment) … this team won’t vanish completely and the early decision to keep Rondo was the most important win this season for the Celtics.

Robert Jerzy is addicted to basketball and analyzes the game beyond the usual stats and figures. Robert is a regular columnist for the biggest german speaking magazine BASKET and his own site nykjournal.wordpress.com.