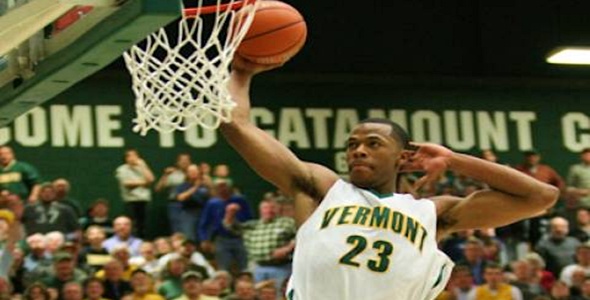 The only good thing about the college basketball season nearing it’s end, in addition to the NCAA Tournament, is that there is no shortage of dunk contests and 3 point shooting competitions. We recently gave you an update on the McDonalds All American Dunk Contest won by Josh Selby, now the NCAA held their own version of All Star Weekend recently in Indianapolis, which is the site of the Final Four. 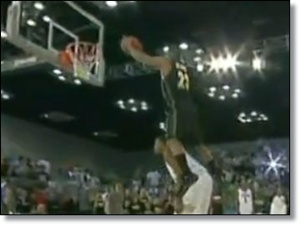 The field was filled with a number of some of the college ranks’ lesser known high flyers like most notably Wake Forest’s L.D. Williams, who was a former HS dunk champ, Bradley’s Chris Roberts, internet sensation Gerard Anderson of UCSF, and the favorite, Marqus Blakely of Vermont. Most of us have heard of Marqus Blakely since he has been featured on ESPN for his frequent ferocious throw-downs and across the net, since everyone is running their version of his Top 10 Dunks of the Season.

Overall, the contest was very entertaining even though a number of the contestants failed to make it to the finals because of failed dunk attempts. Gerard Anderson was the prime example of this as he pulled off a dunk in the early rounds where he took off from the sidelines and grabbed the side of the backboard with his left hand and threw down a thunderous tomahawk windmill jam with his right, but couldn’t complete his 2nd dunk of the round to advance. The real sleeper of the event turned out to be Chris Roberts of Bradley, who pulled off a dunk which I’ve never seen before, an off the glass, reverse windmill jam.

In the minor events of the night, Eric Hayes of Maryland won the men’s 3 Point Shootout, while the women’s crown went to Detroit Mercy’s Brigid Mulroy. Then in a male pride saving sort of moment, Hayes won their head-to-head match-up by only one point over Mulroy, as she missed the money ball attempt on the final rack of balls.

But the night belonged to Blakely, who had sort of a miracle season for any mid-major player by winning an America East Conference Championship, thus making it to the NCAA Tournament, winning a conference POY award, and now a collegiate dunk contest crown. He started the night with a smooth as silk 360 jam, then pulled off another rare dunk in his 3rd attempt when he used his Catamount teammate, Evan Field as a prop. Field made a lay-up as Blakely quickly scooped up the ball and wind-milled it home, to make the Finals. Then for the finale, Blakely enlisted the help of L.D. Williams of Wake as he positioned Williams about 5 feet in the lane, who lobbed the ball off of the glass, as Blakely soared completely over the 6’4 Demon Deacon for the two handed dunk. You can check out highlights of the whole event here.

The real crowd pleasing moment came when Blakely finished off his catch and windmill in the 2nd round and did his version of a salute to Kentucky superstar John Wall who was in attendance, when he did the ever popular John Wall Dance: