Who’s The New #1 In College Basketball? 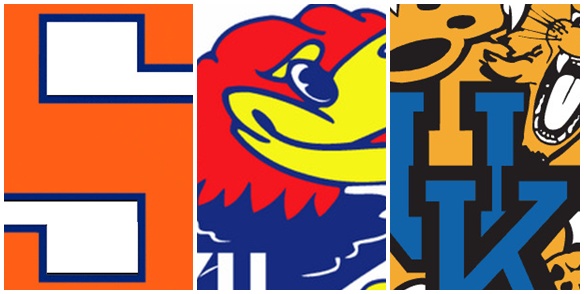 With last week’s Top 3 teams in the AP and USA Today/ESPN Polls, namely Kansas, Kentucky, and Purdue all going down in defeat this weekend, who will the voters select as the new #1 in the country, heading into the final regular season in college basketball? Will it be Syracuse, Kansas State, Duke, or will the experts just re-shuffle the order of the previous rankings and return Kansas or Kentucky to the top spot?

After seeing an almost unprecedented perfect storm of top ranked teams suffering losses, the voters for this week’s poll have a tough decision in deciding who is the best squad in the country. Most experts believed that the Kansas Jayhawks(27-2) are the most complete team in the country since they have held the #1 ranking for a majority of the season, but after losing to James Anderson and Oklahoma State 85-77, they are no longer the clear cut #1.

With Syracuse’s 95-77 dismantling of Villanova on Saturday, have they earned the right to be the new #1? As the best team in the country’s best conference(Big East), the Orange(27-2) are the likely choice to succeed the Jayhawks as the nation’s top squad. It would be the first time Syracuse was selected #1 since the final week of the 2003 season, after the Orangemen, with freshman phenom Carmelo Anthony, won the National Title.

Both Kansas and syracuse have 8 wins against probable NCAA Tournament teams and will be decisive winners in their respective conferences, the Big East and Big 12. In fact, Kansas was undefeated in Big 12 play before their upset at the hands of the Cowboys on Saturday evening. Usually the team which gives the best performance recently, gets the higher nod in the rankings, which also gives the edge to the Cuse.

Even though the Kentucky Wildcats(27-2) were upset by Tennessee as well this week, they also deserve some consideration as the #1 team. After posting two impressive wins this past week over conference rivals Vanderbilt and a revenge game over South Carolina, who gave the Wildcats their only loss until the Vols defeat, the Wildcats showed heart by coming back against the Vols and tieing the score at 65-65, after being down double digits.  Only to get beat late by a three point shot by Tennessee sophomore Scottie Hopson. With their win over Vandy, the Wildcats also have a stranglehold on the SEC East regular season.

Could the Duke Blue Devils(25-4) leapfrog over 4 teams including #3 Purdue, who lost to Michigan State Sunday night without the injured Robbie Hummel, since they’ve been on a tear of late by winning 8 straight and 10 of 11 games? The Blue Devils hold a slim 1/2 game lead in the ACC over Maryland, whom they face on March 3rd along with a re-match against the rival UNC Tarheels on Saturday evening to end their regular season.

Purdue had been on a roll since mid January by winning 10 straight and had moved up as high as #3 in the polls before losing to the Spartans. not many experts, myself included, give the Boilermakers much chance of winning a share of the Big Ten crown or securing a #1 seed in the NCAA Tourney without Robbie Hummel. Although he ranks 2nd in scoring on the club, he is arguably their most important player, especially on the boards and as a 3 point shooter to stretch the defense. The proof is in the pudding, so to speak, as Michigan State out-rebounded Purdue by a wide margin in their victory on Sunday.

One team that virtually no one is talking about is Kansas State, who already has a victory over former #1 Texas earlier in the season and a number of other marquee wins.  The Wildcats have a crucial match-up with in state rival, Kansas on Wednesday. Although they may not get a ton of consideration for this week’s poll, the Wildcats are a long-shot to finish the regular season in the top spot if they can somehow upset the Jayhawks. Frank Martin has a very deep and talented squad, and by boasting one of the best backcourts in the country in Pullen and Clemente, K State could be a dark-horse Final Four team.

While it always is interesting to debate who will wind up the #1 team in the polls, or even a team’s seeding in conference tournaments, ultimately the true determination of who is the best team will come during the much anticipated head-to-head match-ups of March Madness.

Check out a video of the College Gameday Crew discussing who is the new #1 team: