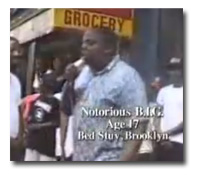 I saw this video floating around on the net last week on the 13th anniversary of Chris Wallace’s (aka Notorious BIG, Biggie Smalls) shooting death, and thought all of you may enjoy it as much as I did. The video is raw, but it showcases a then 17 year old Biggie on the corner of Fulton Avenue in Brooklyn freestyling. The video shows Biggie long before his East Coast-West Coast feud, long before his rise to fame, and long before his first and most influential album Ready to Die was released.