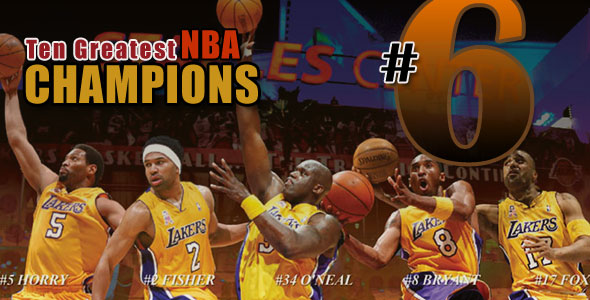 Although the ’99-’00 Lakers squad won more regular season games(67), this Lakers team had perhaps the best postseason run in history, going 15-1. The only blemish was the now infamous AI dropping a late jumper and stomping over a shook Tyronn Lue from the corner in a loss to the Sixers in Game 1 of the Finals. Many may also feel that the ’85 Lakers title team was deeper and should be ranked above this team, but no one can doubt that the ’01 Lakers team was as dominant a force as any in NBA history when it comes to playoff runs.

Around the league, ’01 marked the end of an era in NY as Patrick Ewing was traded to Seattle before the season and Allen Iverson won the MVP and his 2nd scoring title. The defending champion Lakers faced much more adversity in their 2001 attempt to repeat. The coaching staff had to deal with free agency losses, injuries, and the beginnings of the now famous Shaq-Kobe feud. Coach Phil Jackson brought in NBA veterans like 3 time champion Horace Grant and bad boy and Slam Dunk champion Isaiah Rider to help offset the loss of several key players from last season’s team like Glen Rice and AC Green.

The Lakers were good but not great during the regular season, which sometimes happens to teams trying to repeat, but finished strong by peaking at the right time by winning their final 8 games heading into the playoffs. They finished 1st in the Pacific and 2nd in the Western Conference to the Spurs. As a team they sparkled offensively averaging 100.6 points, ranking 3rd in the NBA with O’Neal(28.7) and Bryant(28.5) placing 2nd and 3rd in the scoring race, but only 23rd in points allowed.

In the Playoffs, LA showed why they were defending champs by remaining a perfect(11-0) while blowing through Portland, Sacramento, and San Antonio setting up a matchup with the Eastern champion 76ers in the NBA’s version of David vs Goliath. Philadelphia who made a splash by trading for Dikembe Mutombo in midseason swept the regular season awards with Iverson winning MVP, Motumbo Defensive Player of the Year, Larry Brown Coach of the Year, and Aaron McKie as 6th Man of the Year.

The upstart Sixers showed some pride by besting the Lakers 107-101 in overtime of Game 1 behind AI’s 48 points and unknown Raja Bell’s late game heroics, giving the Lakers their only postseason loss. LA survived Shaq’s foul troubles and some inspiring play by Iverson in Game 2 in Los Angeles to win 98-89. Kobe then made his now famous statements about going back to his hometown for game 3 in Philadelphia to “Cut their hearts out.” Kobe and Shaq did just that by sweeping the next 3 games to win the franchise’s 13th championship and forever making Bryant a villian to his native Philly.

O’Neal earned his 2nd straight NBA Finals MVP by averaging an impressive 33 points and 15.8 rebounds. In terms of winning percentage, the Lakers postseason was the best in NBA history with a record of 15-1, besting the ’83 Sixers 12-1 run. This was the second in a row of three consecutive NBA titles for the Lakers dynasty. I wonder how many more this dynamic duo, which rivaled Jordan-Pippen, Bird-McHale, and Magic-Worthy, could have won, if they could only have coexisted.