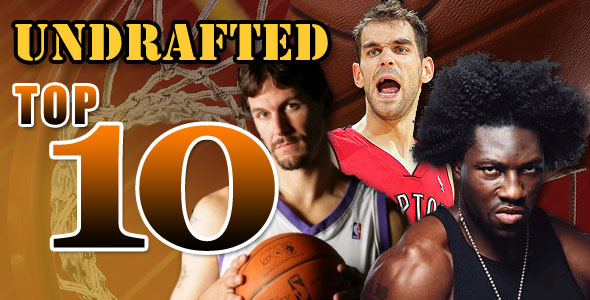 Daniel is a die-hard NBA basketball fan whose favourite teams are the Cleveland Cavaliers and Toronto Raptors.

In honor of the NBA Draft Lottery tonight, and in case your favorite team doesn’t fair so well with the bounce of the ping pong balls, we thought we’d bring you a ray of hope. Here is a list of the Top 10 Current NBA Players Not Drafted.

Note: The following are players who joined during or after the 1987 season, the first year the NBA reduced the amount of rounds in the draft to 2.

After declaring for the draft in 2002, Jannero Pargo went undrafted. The 6’2″ point guard was signed by the Lakers in the 2003-04 season. Despite averaging around 10 minutes per game, Pargo was only able to average 2.5. points per game. After another season with the Lakers and a season in Toronto, he was traded to Chicago where he put up career high numbers in minutes (26.5), points (13.5), and assists (3.6). He is currently a free agent.

Kelenna Azibuke, a Shooting Guard for the Golden State Warriors, began his career with the Cleveland Cavaliers, playing a few preseason games before being waived. But that didn’t stop Azibuke from working hard to accomplish his dream. He was signed by the Fort Worth Flyers of the NBA D-League and led them to the championships. Along the way he collected several honours and opened the eyes of NBA scouts. Houston was the next team to pursue Azibuke but shortly waived him and rejoined his former NBA D-League team. After leading the D-League in scoring, he was finally given a permanent chance to play in the NBA. The injury-plagued Golden State Warriors signed Azibuke. He finished the season with career highs in minutes (32.1), points (14.4), rebounds (5.0), and assists (1.6). He is currently considered one of the best upcoming young players in the NBA at the young age of 25.

Jamario Moon, a highflying small forward from Goodwater, Alabama, currently plays for the Miami Heat. He has spent most of his career playing with teams in several different countries, including the legendary Harlem Globetrotters in 2004, and in the NBA D-League. He is known for his superb dunking and jumping abilities. He exceeded expectations of Toronto’s coaching staff after being invited to a 3 day mini-camp with the Raptors. His performance gained him a 2-year deal. He was the Rookie of the Month for January, 2008, was invited to the Rookie-Sophmore game at the All-Star Weekend in New Orleans, and participated in the Slam Dunk competition where he finished in 3rd place.

Udonis Haslem, a standout at the University of Florida, helped lead them to 4 straight NCAA Tournament appearances. Despite his success, he went undrafted in 2002. After signing with a team in France, he made it into the NBA Summer League and was later signed by the Miami Heat. In his rookie season, he was named to the 2nd NBA All-Rookie Team and was a starter in the Rookie-Sophmore game during the All-Star Weekend He was an instrumental part of Miami’s success in 2006, winning the first and only NBA championship of his career.

After signing with the San Antonio Spurs in 2000, Raja Bell never played a game with them and was released. The next season, Bell helped rally his team from a large deficit in game 7 of the Eastern Conference Finals, scoring in double figures. During the 2005-06 season, Raja Bell put up career highs in minutes (37.5), points (14.7), assists (2.6), and steals (1.0). In addition, he was selected to participate in the Footlocker 3-Point Shootout however declined the opportunity for personal reasons. During his career, Bell was named to the NBA All-Defensive First and Second team, one time each.

Bruce Bowen, an alumni of Edison High School, went undrafted 1993. Despite going undrafted, he is considered one of the best defenders in the game today. From 2001-2008, he received consecutive nominations for the NBA All-Defensive Teams. In addition, Bowen finished 2nd in NBA Defensive Player of the Year 3 times, to Ben Wallace twice and Marcus Camby once.

After 3 seasons in the Euroleague, Mike James decided to join the NBA after going undrafted in 1998. He played for the Miami Heat, Boston Celtics, Detroit Pistons, Milwakee Bucks, Houston Rockets, and Toronto Raptors. His most memorable season was with Toronto where he averaged career highs in virtually every category, including 20.3 points per game. He is the first undrafted player in NBA history to average more than 20 points in a season.

Jose Calderon, who is of Spanish decent, is a point guard for the Toronto Raptors. Calderon started out his professional basketball career in the Euroleague where he spent 6 successful seasons with several teams. In August 2005, Calderon signed with the Toronto Raptors. During the 2006-07 season, he helped lead the Toronto Raptors to the playoffs and in the 2007-08 season, he exceeded his expectations and eventually took over the role of starting point guard from T.J. Ford. Last season was definitely Calderon’s best where he averaged career highs in minutes (34.3), points (12.8), assists (8.9), rebounds (2.9), and steals (1.1). In addition, he abolished the NBA free-throw shooting percentage record, shooting 981% from the line, has an Olympic silver medal, and a gold medal from the World Championships in 2006.

During his career, Brad Miller has bounced around the NBA, playing for the (now defunct) Charlotte Hornets, Chicago Bulls, Indiana Pacers, and Sacramento Kings. Brad Miller has represented the United States at the World Championships twice, where he has won 2 bronze medals and is a 2 time All-Star. Miller is regarded as one of the best shooting big men in the league.

Ben Wallace, who is nicknamed Big Ben, is a 6’9″ center/power forward for the NBA’s best team currently, the Cleveland Cavaliers. He has received countless awards recognizing his defensive ability. He was an NBA champion in 2004, is a 4 time All-Star, 4 time Defensive Player of the Year (a record which he shares with Dikembe Mutombo), a 6 time All-Defensive Team member, and a 5 time All-NBA Team member.