Should Ray Allen have received the NBA Finals MVP? 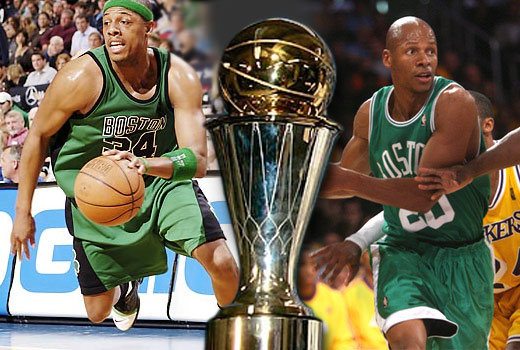 I know, I know, I know, none of the “Beantown Trio” (Garnett no longer wants to be called The Big Three) really care who wins the Finals MVP award, as each of their ultimate goals was to win the NBA Championship. These guys put their individual statistical tracking aside to put all their energy into team chemistry and playing “the right way” as Larry Brown always says. Aside from satisfying historical requirements, the league must feed the beast and give the fans what they crave, an NBA Finals MVP. Given the Celtics “team first” attitude I thought it would have been funny/appropriate if the league named someone like Brian Scalabrine or Scott Pollard as the NBA Finals MVP. Either that or name Ray Allen, Paul Pierce, and Kevin Garnett the joint Finals MVPs.


But when the dust finally settles and fans and analysts alike start taking a closer look at this NBA Finals series; will it hold up that Paul Pierce really deserved the MVP of the Finals? There is already buzz generating that maybe Ray Allen was the most valuable Celtic in getting this done. Keep in mind it isn’t intended to be an award for the entire playoff run, but just the most valuable player of that particular series. Let’s take a look at Paul Pierce and Ray Allen game by game to see whose presence was more valuable.

Although the numbers are fairly close, Paul Pierce shot a much better percentage from the field and was the physical leader on the floor. Ray Allen did take on the tasking in job in Game 1 of defending Kobe Bryant for the majority of the game, holding him to a 9-26 performance though. However, most who look back on Game 1 will remember Paul Pierce being carried off the court in a wheelchair only to return minutes later to a standing ovation from a raucous crowd and hit a game changing 4 point play to ignite the Celtics and break open the game.
MVP Edge: Paul Pierce

Paul Pierce was absolutely dominant in Game 2. He was a perfect 4 for 4 from beyond the arc, and had a whopping 8 assists for his teammates while still carrying the scoring load for the Celtics with 28 points. Don’t let Ray Allen’s numbers deceive you however, as the key to the Celtics title is defense, specifically on Kobe Bryant. Although Pierce and Allen shared duties on Bryant for most of the series, most of this game Allen had Kobe shooting under 50% again.
MVP Edge: Paul Pierce

This won wasn’t much of a contest. The Lakers won the ball game, but the Celtics stayed in it and were right there to almost steal one at the end. All the credit for keeping the Celtics within reach has to be given to Allen on this night, as even Garnett only had 13 pts, leaving the majority of the scoring burden on Ray Ray.
MVP Edge: Ray Allen

Deciding an MVP in this game is a tough one. Ray Allen started the game on Kobe Bryant and accomplished the near impossible by holding Kobe Bryant scoreless from the field by the first half. But the other Lakers players stepped up and the Lakers were up huge. Pierce did a stand up job on Bryant in the second half defensively, but Allen led the offensive charge with a balanced attack of 3 pointers, drives, and pull-ups. Pierce was moving the ball well finishing with 7 assists, but Allen was clearly more efficient and took better care of the ball. Much of the credit for the Celtics record setting come-back has to be given to Ray Allen, James Posey, and Eddie House for their offensive attack and locking down the Lakers perimeter players who were so effective in the first half.
MVP Edge: Ray Allen

This game it wasn’t even in question. Paul Pierce was an absolute beast. He put up Michael Jordan, Dwayne Wade, Lebron James type of numbers carrying his team. Unfortunately for Pierce, he made a key turnover at the end of the game when Kobe stripped him of the rock, or this series may have actually ended in LA. We have to give him a pass on that one though, because the Celtics would not have even been close in that spot if it weren’t for Pierce’s huge output.
MVP Edge: Paul Pierce

Under normal circumstances you would look at Pierce’s numbers on this night and assume it was a close contest with Allen on who was more valuable. Pierce had a horrible shooting night, but he did what most superstars do and recognized this and started to distribute the ball to his teammates in order to contribute and help the team win. This night though was Ray Allen’s. He was an absolute assassin from downtown in the ball game, and he set a couple records along the way. He set the record for most threes in an NBA Finals series with 21, passing Dan Majerle’s 18 with the Phoenix Suns. He also tied the record for most three point makes in a single NBA Finals game with 7. Top that off with 3 steals and only 1 turnover, and you can see how happy his efficiency must make Doc Rivers daily.
MVP Edge: Ray Allen

So for you keeping score while reading this you will quickly notice that adds up to Paul Pierce 3 vs. Ray Allen 3. It’s for this reason that I won’t say that Paul Pierce doesn’t deserve to be the NBA Finals MVP this year. I will say however that Ray Allen deserves the MVP award just as equally, and some may even argue that two games he was clearly the leader in, Games 4 and Games 6, were the most pivotal games of the series for the Celtics to reach their goal.

So although Ray Allen may not care about the individual accolade on this one, I’m sure his fans would be happy to know that he was considered by many to be as equally deserving as Paul Pierce for the NBA Finals 2008 MVP award.

I’m out like Ray Ray from the MVP voting…