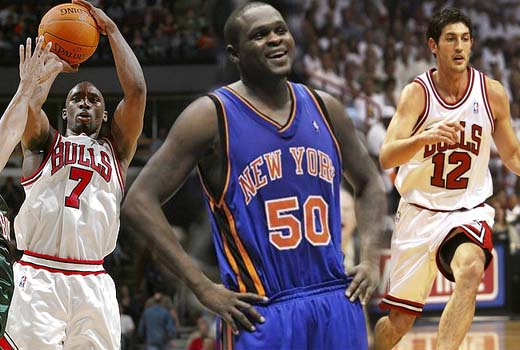 The streaky, but hot shooting Ben Gordon may be the next player on the New York Knicks wish list.

Since the end of the 2008 NBA Draft when the Chicago Bulls selected point guard Derrick Rose with the #1 overall pick, Bulls GM John Paxson has been on the horn trying to find a new home and an equitable deal for their current point guard Kirk Hinrich. Due to the fact that Hinrich is signed on with the Bulls until 2012 with a front loaded contract, there was some early speculation that the Bulls may just try to shift Hinrich over to the 2 spot and start Rose at the point. However if the latest rumors and speculation have any merit than it looks like that horse has left the barn. Apparently Paxson has been working the phones over the last two days trying to find a taker for Hinrich and improve their frontcourt position.


Apparently there were some discussions between the New York Knicks GM Donnie Walsh and Chicago Bulls GM John Paxson yesterday that fizzled regarding a possible deal that would have sent the Knicks Kirk Hinrich and Drew Gooden in exchange for the Knicks Power Forward Zach Randolph. The talks however cooled when the Knicks requested that Ben Gordon by substituted in place of Kirk Hinrich in the deal. Although Gordon is a restricted free agent, the Knicks were hoping for a sign and trade. Apparently D’Antoni covets Ben Gordon for his deep range and excellent physical conditioning. Personally I feel that the Knicks may be better off with Hinrich in the potential deal, as it would solidify their point guard quandary, and act as insurance if they run into another year of the Marbury disappearing act. Although Hinrich had a slow start shooting the ball last year, he improved as the year progressed and by seasons end was once again the model of consistency that has defined his college and pro career to this point.

It is no surprise that the Knicks are willing to move Randolph, as he is not exactly the model player to fit into D’Antoni’s system that relies so heavily on ball movement, the transition game, and outside shooting. None of which seem to fit the strengths of Zach Randolph who would fit better with a slow-paced, grind it out, half-court game. Couple that with the reputation Randolph has had in the past for his off-court personality and behavioral issues and you can see why the Knicks may want to part ways and start fresh under a new GM and Head Coach.

With the draft having come and gone and the New York Knicks remaining fairly quiet thus far on the trade front, we can almost surely expect to see some heavy activity over the next couple of months with their organization. But maybe a more troubling question for the Knicks organization and NY supporters in general might be, why have the other franchises around the league been so unwilling thus far to negotiate with the Knicks?